There is a good chance this article will be censored or hidden from sight because it contains HARDCORE TRUTH!

Thankfully from books, documentaries, the internet, and collective hive minds, the true power at the top of the pyramid is being completely EXPOSED!

If you have spent the time reading and researching unbiased without prejudice you will eventually come to the conclusion that these men below are the most influential in the Illuminati. If you haven’t conceded this fact and acknowledged that the Illuminati is a shadow government ruling the world then you have some catching up to do! Hopefully this lengthy article will help you SEE THE TRUTH! 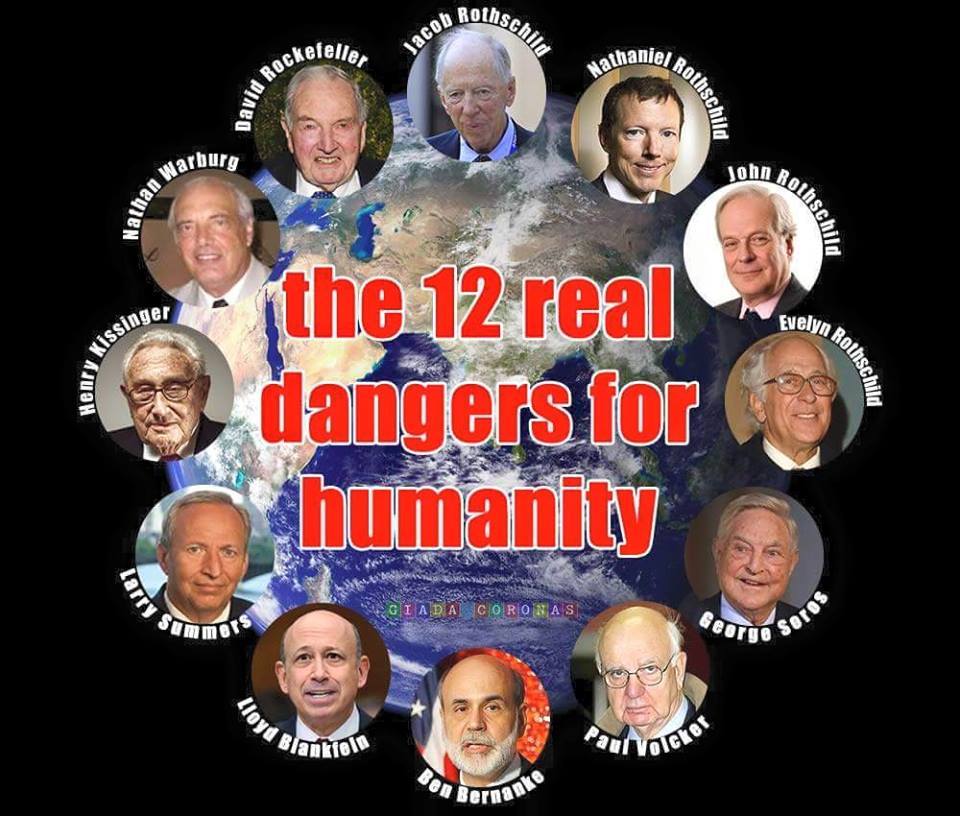 The majority of the inner round table are all Zionist Kharzarian Ashkanzim Jews. Alex Jones and many other so called “truthers” will deny this fact. They want you to believe that the New World Order isn’t Jewish… 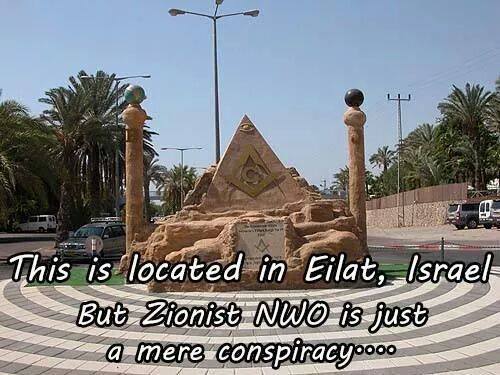 There are disinformation coin-Interpol agents working 24/7 to keep you distracted with bullshit to keep this information from getting to you. 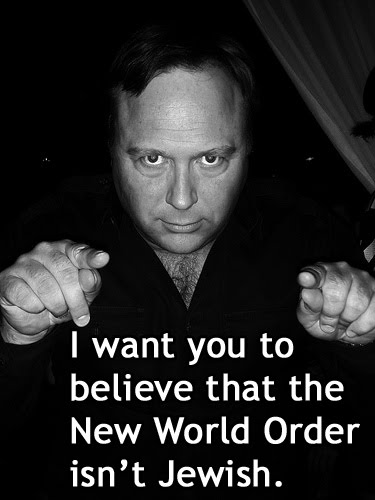 It is extremely forbidden to question Zionist Jews and often you will be ridiculed as racist or anti-Semitic, but it’s very clear based on the symbolism and their core beliefs who they serve and what their interests are. 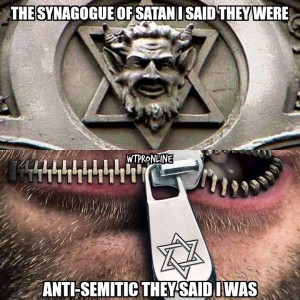 Many in the truth movement who are exposing this shadow government or the powers that be and paying a heavy price of being censored in social networks. 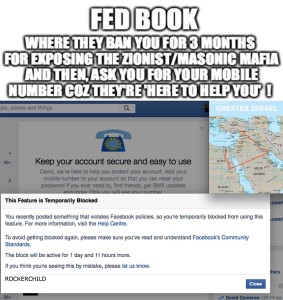 Many of you may not even be aware of it but these Zionist Jews run every aspect of our lives. They run and own our Government, Large Corporations, Media, and Entertainment. If you look at it from a macro prospective it’s really just one big corrupt cabal or corporation.

The Kabbalistic Jesuit Masonic Zionist Symbology is in everything, literally EVERYTHING. When you are awake, you can easily spot it. I am not going to go into lengthy detail about occult symbology right now. If you haven’t already, it’s not too late, start researching! If you have a question leave it in the comments of this article or our social networks, we will do our best to guide you. 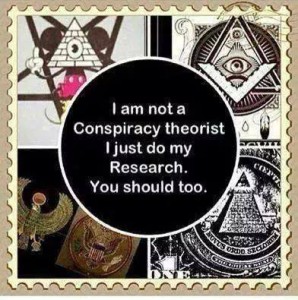 Although Israel contains a large majority of peaceful tolerant loving Jews. Many of them disagree with their governmental body and protest them daily for the innocent bloodshed and war crimes that are committed against innocent Palestinian Arabs in that region. 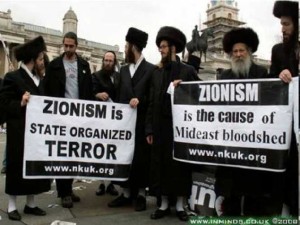 Israel is mainly comprised of secular Zionist agnostic European settlers. Israel was founded illegally as a state by the United Nations in 1948. It was first Established as a British crown colony in 1917 by the Balfour Declaration. 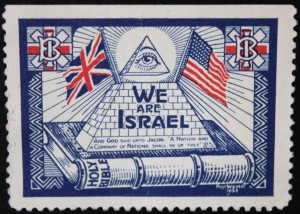 Ever since it’s conception the descendants of the original 12 tribes of Israel whom have fled from persecution Europe have called themselves “God’s Chosen People”. They have used this phraseology to dominate the East and are using this to unjustly dominate the West to create a greater Israeli state that they never possessed. This documentary “Marching to Zion” covers that very well.

After providing a little history and back story the intent of this long article was to address or expose the current paradigm or control that Zionist Israel has over the United States. 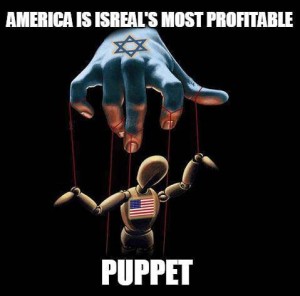 To hold on to our nations Sovereignty, Constitution and Bill of Rights we must address the elephant in the room that nobody wants to talk about or is being silenced and forbid not to talk about. The Zio Mafia have way too much power over our system and that needs to change. They have a multitude of clandestine militia units such as MOSSAD, IDF, ADL, AIPAC, and Jewish Councils (Judenraete) that work in collaboration with MI6 and the CIA to keep Americans from discussing any sort of subjects relating to Zionism. 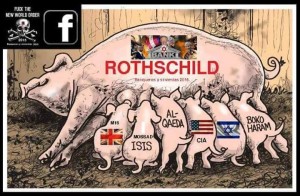 Facebook has become a no fly zone for any conversations in this regard. This article will probably be reported many times and attempted to be taken down by Zuckerberg and Fedbook, he has aligned himself with the Zio Mafia. Many have been reporting having their pages and/or personal facebooks suspended or completely shut down, as this conversation is labeled “hate speech” in the fedbook community guidelines. 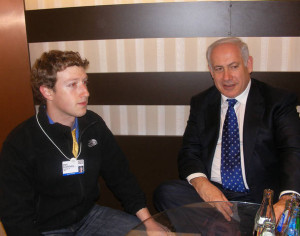 None the less we must stay vigilant in presenting the TRUTH! They cannot silence us all! 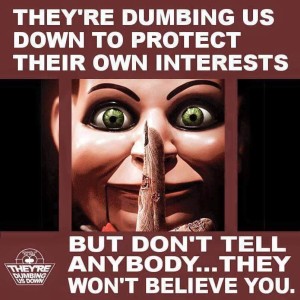 If we are going to change the current paradigm we must cut the head of the snake! Money is the root of all evil and it all starts with Rothschild and our monetary system. 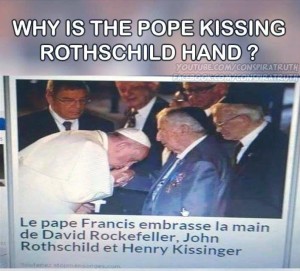 Especially in regard to how much money with give them every day. It’s absolutely sickening to think about considering the fact that America is in bad shape right now, a large portion of us are starving, homeless, have no work, or healthcare. 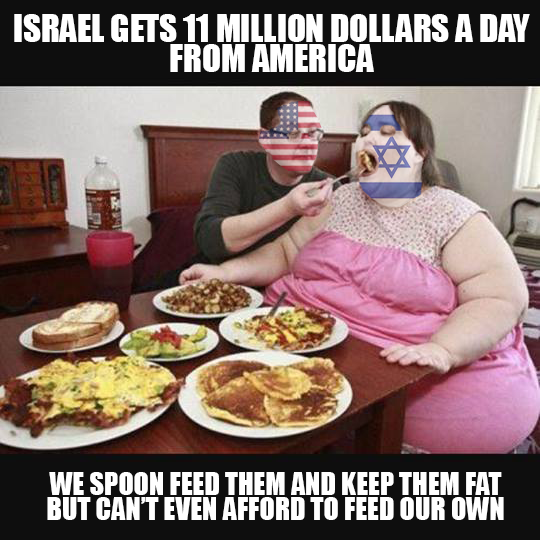 Israel has a population of approximately 7.8 million, or a million fewer than the state of New Jersey. It is among the world’s most affluent nations, with a per capita income similar to that of the European Union.[1] Israel’s unemployment rate of 5.8% is better than America’s 7.3%,[2] and Israel’s net trade, earnings, and payments is ranked 30th in the world while the US sits in last place at a dismal 193rd.[3]

Yet, Israel receives more of America’s foreign aid budget than any other nation.[4] The US has, in fact, given more aid to Israel than it has to all the countries of sub-Saharan Africa, Latin America, and the Caribbean combined—which have a total population of over a billion people.[5]

And foreign aid is just one component of the staggering cost of our alliance with Israel. 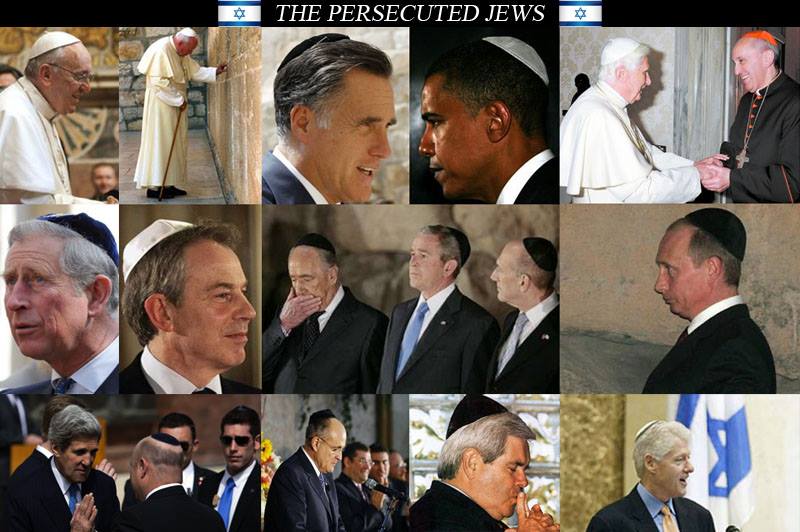 There is so much more when it comes to domestic policy and foreign policy. Israel and the Zionists in charge reflect our standing in the world. It’s no wonder Americans and our Nation is hated and looked down upon by the rest of the world. 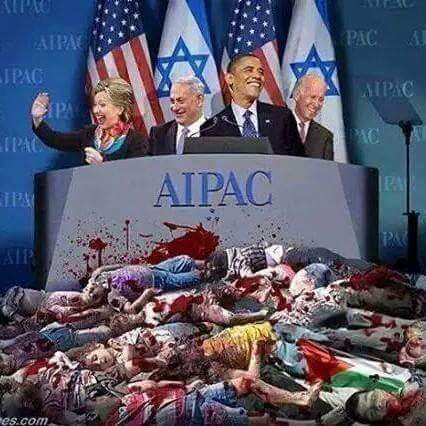 Please read and look at this amazing extensive website.

The tide seems to be shifting in our favor as more and more start reading these reports and thinking critically about what we are presenting here. There are huge implications near on our doorstep we must resolve if we are going to survive as a country. Especially with conflict with Russia and the U.S. Mossad CIA created terror group known as ISIS. I created a video on this connection awhile back with over 10,000 views on facebook, with good information. Please watch if you have time…

It seems from a political narrative here in the U.S. nobody is reporting Americans dissatisfaction with the Israeli State. The only one that is reporting it is actually Israeli pundits because they have to most to lose with their high standard of living that is in actuality is much better than ours. 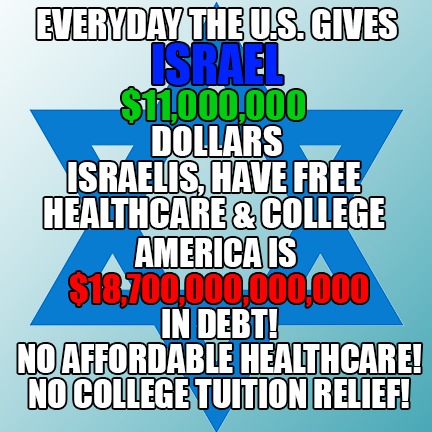 According to a recent public opinion poll conducted by the Brookings Institution, 37% of Americans correctly believe Israel has too much influence in the United States.

The Times of Israel reports:

A new poll by the Brookings Institution published Friday showed significant disapproval in the US over the perceived influence Israel has on American politics, as well as an overall decrease in support for Israeli Prime Minister Benjamin Netanyahu and his government’s policies.According to the survey, which weighted respondents based on US Census data, 37 percent of Americans said they believed the Israeli government had too much influence on US politics, while 18% posited that the Jewish state had too little sway on American political discourse. Meanwhile, 44% said Israeli influence on US politics was at the right level. […]

The fact that the Israeli government (and its international network of agents, partisans, and lobbying organizations operating in America) has too much influence on American politics, especially American foreign policy, is easily demonstrable. Entire books have been written on the subject.

Virtually every single aspiring or established American politician – Democrat or Republican – pledges unswerving loyalty and fidelity to the Jewish state of Israel. Failing to do so ruins political careers quickly.

At its essence, American foreign policy is discussed and formulated strictly to advance the geopolitical interests of the Jewish state of Israel. Furthermore, American domestic policy is heavily influenced by the organized Jewish community, especially on issues pertaining to immigration, education, and cultural/social matters (race, homosexual agenda, etc).

For all intents and purposes, the organized Jewish community and the various pro-Israel lobbies dominating the American electoral process essentially own and control the United States federal government, and it’s becoming more and more obvious with each passing day.

Outrageously enough, Jews themselves have openly admitted and boasted about controlling America and our government. For example, in October 2001, then Israeli Prime Minster Ariel Sharon unabashedly stated: “We, the Jewish people, control America, and the Americans know it.”

“I know what America is,” current Israeli Prime Minister Benjamin Netanyahu once openly explained to Jewish extremist settlers in Occupied Palestine. “America is a thing you can move very easily, move it in the right direction.”

Fortunately, however, more and more Americans are realizing that it’s time to put America first, and #DumpIsrael immediately.