As many of you I am sure are aware by now, Nate James the founder of We the People Anonymous facebook page and this website was d0xed along with the alleged KKK members. 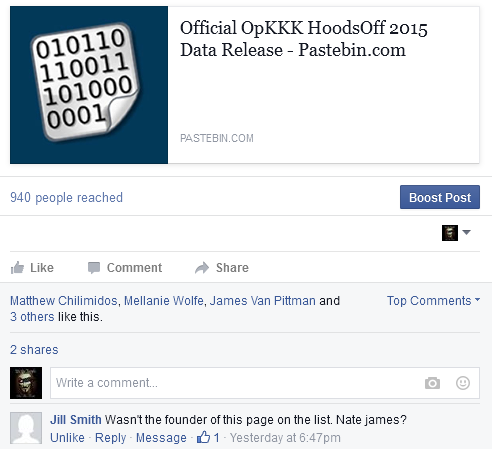 Many other activists and truthers have also revealed that they were falsely accused and targeted, as well as prominent Libertarian political Cartoonist Ben Garrison. 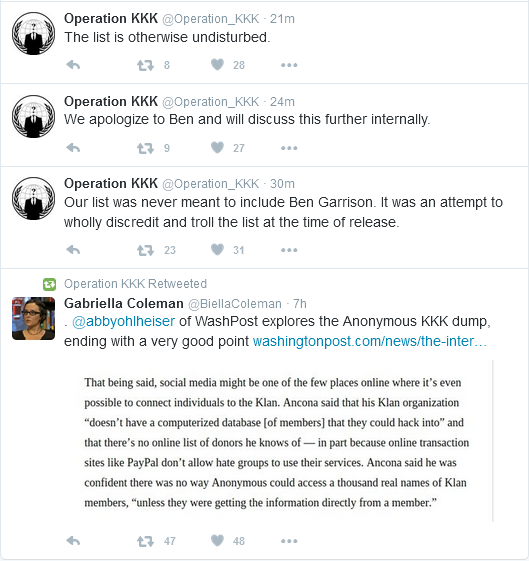 They have issued him an apology but not Nate James… Wonder why that is? To our knowledge Nate James still remains d0xed but not on this “Official Anonymous Operation_KKK” page paste bin list.

We published a reported scrutinizing the legitimacy of Operation_KKK for exposing their lack of credibility on twitter as a page with 313 tweets following 1 account with 44.1k. The sudden rise into existence was vague and questionable within our anonymous sources. The fact they are being sourced by so many mainstream news pundits is extremely alarming and should throw up red flags for everyone. Since when are MSM journalists buddy buddy with us Anons?

After releasing this report, Nate James was d0xed for publishing “false information”, this lead to a harassment by other (Anonymous) as well as KKK members via email and phone calls…

“As an activist I extremely disappointed with recklessness and total disregard of their actions within the anonymous community. Their behavior not only proves my reservations about Operation_KKK, but exposes them as having no credibility in the anonymous community, this most recent pastebin has been redacted several times for the lack of validity. The entire operation is one big joke.”

“Not only were a large majority of these identity releases not KKK, they were just white or Caucasian. It would appear that whomever is responsible for this dump is just trying to create a race war and not expose a deep rooted racist organization.”

“The emails and phone calls I unjustly received were absolutely disgusting… Whomever is responsible should be annexed from the Anonymous movement. YOU ARE A DISGRACE TO US ALL!”

Continued on… Is an article published yesterday even about the release of the information by the Washington Post. After days of inaccuracies, confusing reports, and false starts, Anonymous’s much-hyped “Operation KKK” finally released a list of — if not the promised 1,000 — hundreds of names and social media accounts, many of which appear to have clear connections to the Ku Klux Klan, or other white supremacy groups.

The Pastebin document was distributed via Twitter on Thursday afternoon. It contains hundreds of links to individual Facebook accounts, some of which had already been removed in the days before the promised leak. As the list began to circulate, even more of the linked accounts began to vanish.

The list includes many already known Klan members, and many others with public online profiles that clearly indicate an affiliation with a white supremacy organization.

The data dump was one of the most widely hyped operations in the history of Anonymous, after the amorphous Internet collective promised last week to unmask about 1,000 members of the Ku Klux Klan, or their associates. But as is characteristic of the sometimes chaotic, leaderless group, things didn’t go quite as according to plan: An early leak of names, phone numbers, and e-mails that one hacker said were those of Klan members proved to be substantially inaccurate, threatening to tank the operation before it began. The operation’s official Twitter presence eventually disowned that leak, and promised a more carefully researched list on Thursday.

The resulting list, although unverified, appears mixed on that front. It is, in part, a documentation of several white supremacist networks on Facebook, which Anonymous says it compiled via “human intelligence.” That included consulting with experts and public records, and covert online chats with some of the individuals included on the list. “You never know who you are talking to on the internet,” Anonymous said.

But there are some very apparent limitations: Some of the names listed are clearly marked as aliases. Organizers suspect that others on the list might be fake names as well.

Vice also spotted one error on the list — the inclusion of Ben Garrison, a libertarian cartoonist who told The Washington Post in a late Thursday e-mail that he is not in any way a white supremacist, but has long been the subject of a racist meme that, he said, has “ruin[ed] my online reputation as well as my commercial art business.”

One of Garrison’s cartoons was altered a few years ago, without his knowledge, and circulated on 4chan with added anti-Semitic imagery that Garrison said he found “offensive.” His response prompted trolls to alter more of his cartoons with racist imagery, and eventually they adapted his name and likeness into a white supremacist “dopplegänger” meme. “There were 10 impersonation pages on me in 2014. I complain endlessly to Twitter about people using my name and face to tweet racism,” Garrison wrote to The Washington Post.

Rather than looking like the more traditional sort of “dox” that the operation was hyped to be, the list is almost entirely comprised of Facebook accounts. There were a few Google+ profiles and Twitter accounts in the mix.  The list also has a couple of e-mails, at least two which were already publicly available, and another that is listed for an entry marked as “deceased.”

But Anonymous doesn’t always speak with one voice, and one Anonymous associated-account began tweeting screen shots of phone numbers, addresses, and at least one partial social security number of some listed individuals within minutes of the list going online. That account also gave a peek into some of the trickier methods used by the operation’s volunteers, including, it appears, using secret Klan greetings to get their targets to talk to them.

The list does appear to demonstrate — at least, initially — that some of those working on the operation were aware of concerns about the accuracy of their efforts, and that the consequences will be huge for the group if they get it wrong. “We understand this initiative is extremely controversial and we know we will face much criticism for this operation and our work will be heavily scrutinized. We hope this body of work speaks for itself.,” the document states in an introduction to the list.

Gabriella Coleman, an author and arguably the best-known expert on Anonymous, had a mixed reaction to the results of the operation shortly after it went live. She was impressed with the group’s “town hall” discussion on race and representation that took place on Wednesday, as a companion to the information dump. To her, that online conversation demonstrated that there were “thoughtful” individuals with experience working on racial justice issues involved in the operation, she said. But “since the data is impossible to verify, it does also make me a little suspicious as well,” she wrote in an e-mail. “Hard for me to wrap my head around this one.”

Although Anonymous has a long history of taking up causes that might align with grassroots racial and social justice issues, it also has a long history of doxxing the wrong people, often undermining the group’s own intentions by targeting innocent people with vigilante tactics. Those include incorrectly identifying a man as the officer who fatally shot Michael Brown on Aug. 9, 2014, in Ferguson, Mo.

[Anonymous, Gamergate and the impossible dream of vigilante justice]

But Coleman said that the final results of Operation KKK speak to some interesting changes in Anonymous’s inner workings. For one thing, it shows that “the folks behind it are thinking through questions of race and their own controversial tactics more thoughtfully and openly than in the past,” she said.

The Washington Post looked at a random sampling of Facebook profiles linked through Anonymous’s document. While some were already taken offline, the ones we viewed contained clear visual or written connections to the Ku Klux Klan, neo-Nazis, or white supremacy in general. Frazier Glenn Miller, the white supremacist who was convicted of murdering three people outside of the Jewish Community Center in Overland Park, Kan., is also on the list, but his entry simply includes a name and a short description of his crime.

Some of the social media profiles we viewed listed Klan organizations as their place of work. Although many members of the Klan don’t identify publicly with the group using their real name, some, including its leadership, certainly do. Those names were also present on the list.

Frank Ancona, an ‎Imperial Wizard for the ‎Traditionalist American Knights based in Missouri, said in a phone call shortly before the list went live that he’s “one of the rare people” in the Klan who uses his real name. Ancona and a Facebook account said to belong to his wife — who is described as a non-Klan member — were listed.

Ancona said that he thought many members who held sensitive jobs — he gave the example of police officers — would “make a fake account”  to interact with other Klan members online.

That being said, social media might be one of the few places online where it’s even possible to connect individuals to the Klan. Ancona said that his Klan organization “doesn’t have a computerized database [of members] that they could hack into” and that there’s no online list of donors he knows of — in part because online transaction sites like PayPal don’t allow hate groups to use their services. Ancona said he was confident there was no way Anonymous could access a thousand real names of Klan members, “unless they were getting the information directly from a member.”