Million Man March – The Good and the Bad

As our 4th annual Anonymous Guy Fawkes V for Vendetta holiday expires, we would like to Remember Remember the 5th of November. For it twas a day of glorious protest and solidarity demonstrated on full parade as millions took to the streets in 671 cities around the world to participate in this massive protest against government corruption.

There are some key points and issues we feel we need to address for future reference and acknowledgement of what this ‘Anonymous movement’ is about. For we have been infiltrated greatly by provocateurs whom wish tarnish the once peaceful grassroots movement.

In this article we are going to address many of the good, bad, and ugly things that we’ve seen across social media as well as other independent alternative news organizations.

Firstly, we would like to acknowledge the GOOD that we saw at the Million Man March in Washington, D.C.

As the march was carried  D.C. a homeless was greeted from his fellow citizens with love, where they showered him with hugs, money, and food.

This activism is outstanding should be held in the highest regard, we would like to commend those of you whom donated to this man.

Another good point is we saw a lot more citizen journalists documenting and filming the events live and unfolding and holding their respective local authorities accountable and not cowering or rising in opposition to the intimidation fear tactics and/or verbal assaults dished out unjustly by the thin blue line mafia.

The first interaction we had with the police

At the US Capitol Building gates #MMM #MMMDC

As in usual London, being one of the largest epicenters for the movement showed extremely passionate citizens protesting. While we saw mainly peaceful demonstrations, there were also what appears to be staged acts of violent activity and needless vandalism on display.

This is BAD. We must pay heed, for thee United Nations governments want our resistance to be physical so that they can reciprocate with more oppressive draconian measures to warrant taking further rights away to silence our dissent. Simply destroying property or assaulting law enforcement officers whose hearts and minds we need to win doesn’t set well with our cause of protesting war and should be avoided… We cannot fight fire with fire.

As this police car has been said to have been placed strategically in the path of demonstration for provocateurs whom destroyed it and set it ablaze… According anonymous social media sources, this was a false flag op meant to discredit the peaceful demonstrators. 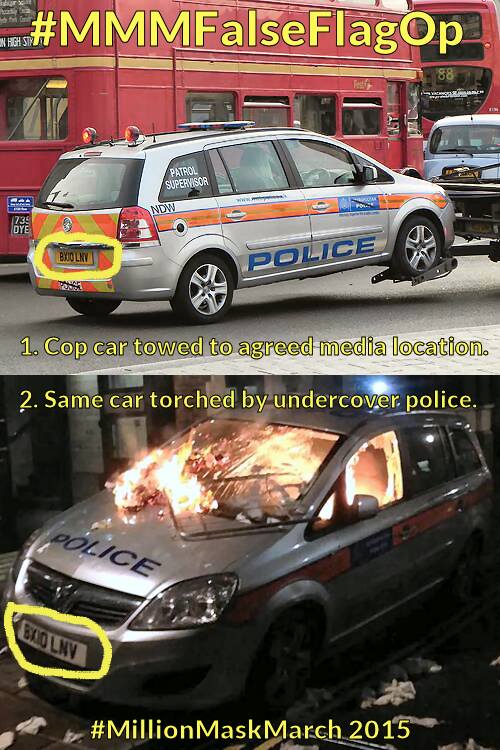 We must stay vigilant in preserving the integrity of this movement by holding each other accountable and looking out for clandestine operations who can easily infiltrate and hijack our movement as violent provocateurs.

Remember, there is NO leadership or hierarchy holding us accountable. WE ARE ALL LEADERS. WE MUST HOLD EACH OTHER ACCOUNTABLE! ANONYMOUS IS JUST AN IDEA… Anyone can shape our movement and it’s cause… It’s up to US! WE THE PEOPLE to shape the direction of the movement collectively to keep it strong and alive for future generations to SEE THE TRUTH!

Some of us will have stronger voices and will attempt to bully others in the movement to follow their leadership or ideologies. We must abstain from subscribing to any sort of official narrative and/or allowing mega anonymous social networking pages to call the shots for the rest of us.

If you have anything you would like to add to this report, please leave it in the comments and or send us a message. We would love to get more of your videos and testimonies to document this event for our records and archives!