The progressive liberalized politically correct movement is blowing up in the face of the academic community supporting it and making all young Americans look like mentally sick fascist communist new age ideologues. Universities now all appear to have this politically correct mafia mob mentality which is very evident in rural middle America which is plaguing the nation like a Nazi social justice virus.

Congratulations Mizzou, while demonstrating your 1st amendment right expressing solidarity against racism by lawful assembly and hunger strike against your academic collegiate leaders for not justly responding to your requests of disciplinary action, you exemplified holding your school, students, president, and chancellor hostage by means of self harm can be an effective course of action for any group that feels underprivileged.

People should have the right to not be threatened by racial slurs or racist vandalism but that right should not warrant others have the privilege to step on other people’s rights. Now instead of addressing a lack of leadership or proper protocol of these situations by letting the University of Missouri at Columbia administration work with the black students and football program, the entire once prestigious university is now lacking leadership and having to pickup the pieces of politically correct nuclear fallout, which isn’t good for anyone as this Mizzou student points out.

This is a prime example of how the PC SS NAZI’s are destroying the atmosphere of what made America a desirable place to travel for higher learning. We cannot even work together to fix injustice or racism within a small community of students without educators becoming polarizing figures and provocateurs.

If Mizzou is more of a politically moderate school, what does this say about more liberalized progressive institutions? Seems some self proclaimed liberal professors like Edward Schlosser are afraid of their liberal progressive students. 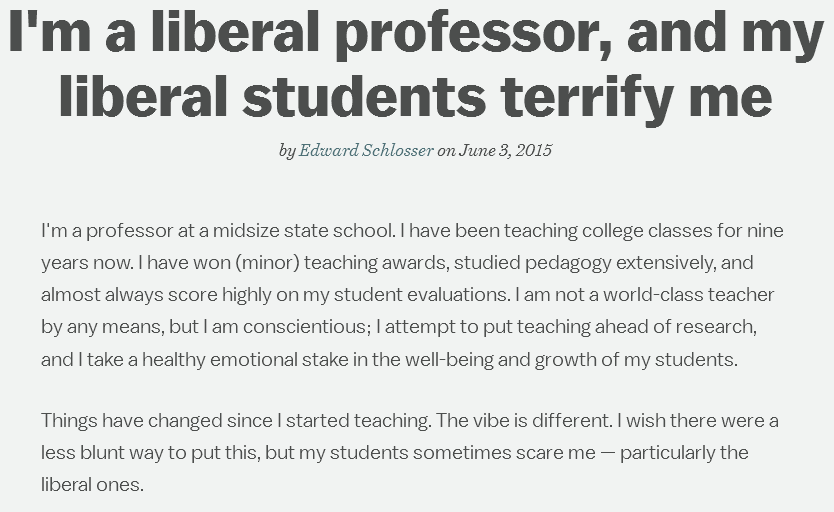 A lot of ignorant people will view this as a victory for the black rights movement, when in actuality it was regressive and only creating more tension and hostility for one another, especially in a campus atmosphere. It’s really an unwelcome distraction in a learning environment which should be a safe place for free thinking and free speech. Now many of the students are afraid or have been coerced into accepting fear for offending anyone. 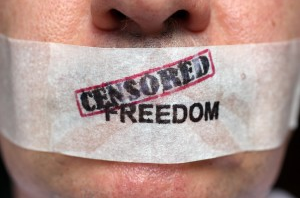 Sadly, the Mizzou controversy seems to have infected other large state university campuses like the University of Nebraska, where college students are being warned that behavior which can be misconstrue as abusive hate speech will not be tolerated.  UNL students are now being solicited with the “think before you speak” campaign.

As if cracking down on free speech wasn’t enough, America now has this 3 world new age conformist educators who have infiltrated that academic system. We now have gate keepers like professor Melissa Click who want to control the media, harassing student journalists by asking “muscle” to physically remove them from the designated tent city or “No Media, Safe Place”.

What’s concerning is that this is supposed to be an educator, someone that is supposed to be knowledgeable of basic constitutional rights, who is an open expressed advocate against bullying, who should know she is impeding on the same exact rights she is using for expressed cause of protesting.

Talk about being hypocritical! You would expect this type of fascist draconian behavior to take place on the front lawn of corporate institutions like Monsanto, not from educators in the heartland of America.

Whats sad is that this professor is clearly in the wrong, but all of the students follow along in chant in a herd like mentality. It just goes to show how damaging one educator with an authoritarian complex can be to a study body. If you assemble in intent to peacefully protest you should be by then conceding that journalists have the same right to film you and or record that event…

Isn’t freedom of press synonymous with freedom of speech and right to assemble?

What are your thoughts? Do you feel that the Mizzou football team and students went too far with this protest against obvious occurrences of racism?

Do you feel we should have to censor certain words or uses of words? Please comment. We would like to know your thoughts!