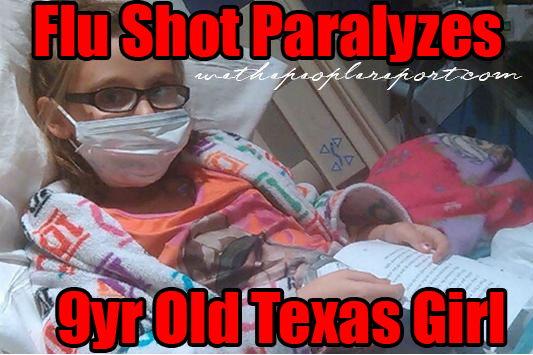 Brianna Browning was a healthy 9 year old resident of Galveston County Texas. Her family requesting an explanation as they believe their young daughter was injured from a flu shot vaccination. She was omitted to the Texas Children’s Hospital in the Medical Center on October 17th after falling very ill after the flu shot she received at her school Bolivar Peninsula on October 15th.

“Eight hours later she was profusely vomiting and again Friday morning. Saturday, she was paralyzed from the waist down, blind and seemed like she had a seizure,” Brenda Faulk, Brianna’s mother said.

“She was perfectly healthy. No symptoms, no sickness,” added her mother.

Doctors say that don’t know what the cause is and have not made an official statement. The CDC recommends anyone over age of 6 months get a flu shot every year, unless having a previous allergic reaction to “egg yolk”. Why are young children with otherwise healthy immune systems showing no compromise being coerced into getting a flu shot every year? Certainly it appear that there is some sort of agenda taking place here.

Of course we are assured by mainstream media and medical institutions like County Public Health and Environmental Services that flu shots are extremely safe, but yet we are seeing more than just mild reactions. We are seeing cases like this where young child otherwise healthy are falling extremely and/or otherwise dying.

“There are a lot of myths that are out there. There are some cases, very rare, that a flu shot has a more severe reaction and those reactions are minor in terms of the number of people who are going to get those,”

It appears that Brianna’s parents feel that she is more than apart of small group, as they want to raise awareness for other families. We should be informed of the risks involved with any sort of flu shot or vaccination. Clearly it would appear that there is standard protocol to downplay any information about vaccine injury in the mainstream media.

We The People Report would like to ask you to keep Brianna in your prayers! Please share this article and help spread awareness of the dangers of flu shot vaccinations.

If you would like to donate to help her family out, here is her Go Fund Me