Statistics show that at least 22 veterans (1 active duty solider) kill themselves everyday. Some reports indicate this number is actually even higher than the study has indicated in 2010. With the Iraq and Afghanistan wars coming to a close, why are military suicides the same or on the rise? One could arguably say that many of these deaths are because of the fallout of (PTSD) Post Traumatic Stress Disorder or some types of depressive mental illness, but is that the truth?

There is a hidden enemy that nobody will acknowledge! An incredibly large amount of soldiers are being prescribed the following SSRI DRUGS (here are some): Seroquel, Paxil, Prozac, Abilify, Wellbutrin, Modafinil, Methylphenidate, Xanax, Dexedrine, Effexor, Haldol, Adderal, Stelazine, Depakote, Thorazine, Zoloft, Ambien to treat overly diagnosed disorders. Estimates include somewhere between 25-30% take some sort of anti-depressant. The numbers could even be higher, as there is patient confidentiality laws and lack of paper trails. 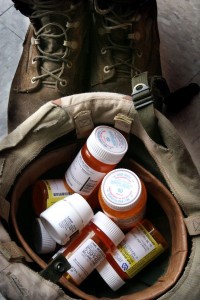 The mainstream media WILL NEVER ACKNOWLEDGE THIS UGLY TRUTH! The Big pharmaceutical companies like PFIZER, NOVARTIS, MERCK, and SANOFI spend 5 billion every year to advertise in the mainstream media to control the official narrative. Corporate News propaganda protects the interests of these companies and will not investigate.

Based on all the evidence presented here and in the documentary presented below, it would seem it’s more important for the Pentagon, the U.S. Department of Veteran Affairs and the corrupt Washington D.C. crony establishment to keep the profits and stocks high, as budgets indicate 7 billion a year is spent on military mental health.

It’s so bad in fact the Pentagon spends more on pills, shots, and vaccines than it did on Black Hawk helicopters, Abrams tanks, Hercules C-130 cargo planes and Patriot missiles COMBINED, one 2012 report says.

There is definitely a hidden agenda going on here! More troops are dying off the battlefield than on it!

THE EXPERIMENTAL PSYCHIATRY INDUSTRY SOLD UNDER THE GUISE OF HELP FOR MENTAL ILLNESS IS KILLING OUR TROOPS! LETS HONOR OUR MILITARY MEN AND WOMEN! PLEASE WATCH THIS DOCUMENTARY AND SHARE ALL OF THIS INFORMATION! THANK YOU FOR YOUR SERVICE AND GOD BLESS OUR VETERANS!