QANON UPDATE: Obama Says He Is Kenyan In Speech In Africa

He delivered a speech in Kogelo, Africa the ancestral home of the Obama’s. A comment that he made in his speech has caught the attention of #Qanon autists.

Was this a mistake? Did he slip up here or is he subtly trying to say that he is actually a former Kenyan citizen?  Remember Qanon drop #894? “When we’re done he’ll claim Kenyan citizenship as a way to escape.” 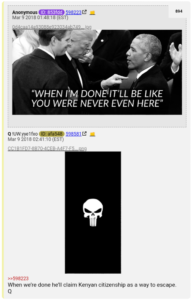 What are your thoughts? Did he make a mistake here in his speech or was this intentional? Leave your comments below! #WWG1WGA