What All Pregnant Women Should Know

Disclaimer: We are not medical professionals, please do your own research and have a conversation with your OGBYN about the following information we have provided.

In an age of increasing concern about the toxic exposures our babies are getting even before birth, and the impact of these on their short and long term health, including the impact on their DNA (genes), it is important to note that at least one of the glucose test drinks EasyDex, by Aero Med (note that ingredient lists from the test companies are notoriously hard to find online!) contains something called BVO, or brominated vegetable oil. BVO is also found in at least 10% of all soft drinks in the US, and is included to keep the favoring from floating to the top of the beverage.

According to the Center for Science in the Public Interest, “safety questions have been hanging over BVO since 1970, when the FDA removed BVO from its ‘Generally Recognized as Safe’ list of food ingredients.” At that time, the FDA granted BVO ‘interim status’ as a food additive which allowed its use in soft drinks, but it was and remains banned from European and Japanese soft drinks. BVO is patented in the U.S. and overseas as a flame retardant.

Yet it is in EasyDex, a medical testing “drink” consumed by presumably hundreds of thousands of pregnant woman in the US!

So what exactly is BVO?

BVO contains bromine, which is known to interfere with thyroid function. Even more frightening, it is found in the brominated flame retardants that are used in upholstered furniture and children’s products.

Research has found that brominated flame retardants build up in the body and breast milk. BVO leaves residues that accumulate in body fat, the brain, the liver, and other organs. Studies in animals demonstrate that BVO is transferred from mother’s milk to the nursing infant. BVO has been associated with heart lesions, fatty changes in the liver, and impaired growth and behavioral development, and both animal and human studies have linked BVO to neurological problems, fertility problems, changes in thyroid hormones and precocious puberty.

Charles Vorhees, a toxicologist at Cincinnati Children’s Hospital Medical Center, told Scientific American that “compounds like these that are in widespread use probably should be reexamined periodically with newer technologies to ensure that there aren’t effects that would have been missed by prior methods… I think BVO is the kind of compound that probably warrants some reexamination.”

If you haven’t had it yet – think about saying “NO!” as part of the revolutionary movement to keep toxic chemicals away from our unborn babies.

I personally did a more traditional method to test for Gestational Diabetes because YES, it is important to look out for starting around 28 week pregnant. My doctor was not thrilled that I denied this drink, however THERE ARE OTHER MORE NATURAL METHODS.

I fasted the night before my test and in the morning had my blood drawn, immediately after I ate a high carbohydrates breakfast (a potato and a half, plus some bread which equals out to the same amount this drink has plus some) and returned two hours later to check my blood sugar.

Normally when we eat carbs, they convert to glucose, which circulates in our blood. In response, our body releases insulin which pulls the glucose out of the blood and puts it into our cells, where it is used for energy. However, when we’re pregnant that insulin response is dampened, which essentially keeps more glucose in the blood so that it can be transferred to the baby through the placenta.

Unfortunately, sometimes blood sugar levels go too high, and that’s not good for mom or baby. It may be because we have access to more carbs/sugar than we used to historically, but other factors may play a role as well: stress, autoimmune issues and sleep deprivation for example. (source) When our blood sugar reaches unhealthy levels we have hyperglycemia, or gestational diabetes.

Glucose is a nutrient that helps babies grow, so as you might imagine too much of it causes them to grow larger than normal for their gestational age.

According to this study of over 25,000 women, the complications associated with gestational diabetes are:

What are the signs and symptoms of gestational diabetes?

Obviously, some of these symptoms are common to pregnancy even without the presence of gestational diabetes, so they cannot be used exclusively to diagnose GD.

Does GD increase the risk of infant death? No. According to the researchers, there is no association between gestational diabetes and infant deaths.

However, mothers who develop gestational diabetes do have an increased risk of developing type 2 diabetes later in life. (source)

You certainly have the right to read the label on the glucose test drink you are offered before agreeing to the test! 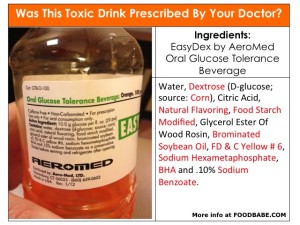 You also have the right not to be screened for GDM, as well as to choose your preferred screening method. In fact, in 2001 ACOG clearly stated that gestational diabetes guidelines should not be construed as dictating an exclusive course of treatment or procedure. Variations in practice may be warranted based on the needs of the individual patient, resources, and limitations unique to the institution or type of practice.” And further, and more importantly, ACOG clearly states that a pregnant woman’s autonomy is to be respected, and that judicial authority should not be used to implement treatment regimens aimed at protecting the fetus, for such actions violate the pregnant woman’s autonomy.”

If you are in your first or early second trimester, consider a Hemoglobin A1C test. It is a simple blood test that doesn’t require you to ingest anything prior. While there is no set level that determines gestational diabetes (there are levels for non-pregnancy-related diabetes), done early enough in pregnancy it can determine whether you already had undetected diabetes before even becoming pregnant, and a level of 5.45% may be associated with gestational diabetes, in which case you can make dietary changes and wait until 24-28 weeks gestation, when the glucose challenge and GTT are typically done, and then decide whether to test.

Consider an excellent diet and random glucose testing. This just requires finger stick blood testing which can even be done by you at home, and is a commonly used alternative for women who can’t tolerate the Glucola. However, one test result alone is not enough to diagnose or rule out GDM, so you’ll want to work with your doctor or midwife to come up with a reasonable schedule for testing and assessing your results.

A common misconception is that the oral glucose challenge test (OGCT) given to most women offers a definitive answer on whether or not gestational diabetes is present. In reality, it is a SCREENING test, not a DIAGNOSTIC test.

It has a 76% sensitivity rate, which means that for every 100 women that have gestational diabetes, the glucose screening test will only identify seventy-six. That means twenty-four pregnant moms will think everything is within range, when in fact they have elevated blood sugar levels. (source 1, source 2)

On the flipside, 24% of women who test positive for gestational diabetes don’t actually have it, so unless they insist on confirming with the oral glucose tolerance test (OGTT) they will be labeled as high risk for no reason and may be subject to unnecessary interventions and medical procedures.

Another problem with the OGCT/OGTT, is that you could ‘fail’ a test in week 28 that you would have ‘passed’ had you taken it in week 24. This is because “blood glucose values rise as pregnancy advances, but no adjustments are made for this.” (source)

And not only does what week you take the test matter, what time of day can affect the result as well. This study found that our response to oral glucose is tied to our circadian rhythm, and unless our rhythm is impaired we will do better on the test at 8am rather than 4pm. As you can see, there are a lot of things that can sway the results.

If we all say NO to toxic glucose test drink ingredients, we might be able to put enough pressure on manufacturers to change to remove unnecessary and potentially toxic ingredients (including things like ester of wood rosin!). It’s really important to know that this is not an emergency decision, and that you do have a choice!

No matter what you decide with your pregnancy glucose test, remember:

I encourage you to look at research and decide which method is right for you.