Earlier today Florida had reported it’s first official case of Zika in the state. Within hours, Governor Rick Scott has declared a public health emergency for these four counties.

Zika virus (ZIKV) is a member of the Flaviviridae virus family and the Flavivirus genus, transmitted by Aedes mosquitoes. In humans, it causes a mild illness known as zika, Zika disease, or Zika fever, which since the 1950s has been known to occur within a narrow equatorial belt from Africa to Asia. In 2014, the virus spread eastward across the Pacific to French Polynesia, then to Easter Island and in 2015 to South America, Central America, and the Caribbean and is now considered pandemic.

The illness is like a mild form of dengue fever, is treated by bedrest, and cannot be prevented by drugs or vaccines. Zika disease is related to yellow fever and West Nile disease, which are caused by other arthropod-borne flaviviruses. A link to microcephaly in fetuses born to infected mothers is now thought possible, and on 15 January 2016, the CDC issued travel guidance on affected countries, including the use of enhanced precautions and considering postponing travel.

We posted a picture of how the Zika Virus Patent was owned by the Rockefeller Foundation: 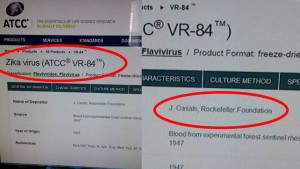