Facebook banned me again for 30 days! You won’t believe what for…

Our founder and admin has been banned from facebook again for another 30 days for posting a very benign image of a Ben Garrison cartoon. Apparently exposing the origins of Daesh/ISIS is extremely Anti-Semitic! THE TRUTH HURTS FOR THOSE THAT HATE TRUTH!

Did you know you can post images of bare breasts now without getting reported? Try it!

It seems that whenever we are getting good organic traffic in spite of their algorithms and censorship, they will find anything to report just to shut our page down. That in itself is abusive, this suspension is not justified nor is it warranted, this image is widely circulated on facebook.

The last time Nate James account was suspended for a very benign image the ISIS Paris shooting took place the day after. Could there be another false flag attack on the horizon?

It would appear that based on these actions that WE the People is becoming too influential in the social network. As all of our editors received a notification that our page was unpublished, however for some reason it still remains.

It seems they are cracking down on the truth movement as our fellow editor and Mike Paczesny founder of the rundownlive.com was also banned from his account for 30 days.

This is proof that Mossad, the CIA are getting desperate at this point. They have been completely exposed, they are the “Islamic State”. Anyone who is dedicated to exposing the truth has become an enemy of the state.

If you run a page and haven’t been banned at least once, you need to step up your game! 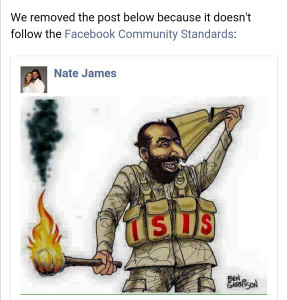